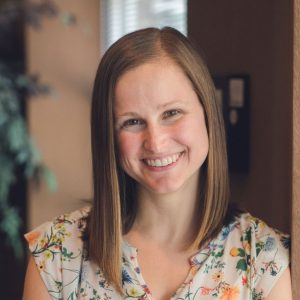 Rachel comes to us from the small town of Circleville, Ohio, a Buckeye from birth. She felt the calling to midwifery from a young age, which solidified in High School when she attended the home birth of a close family friend. In 2013, she graduated from The Ohio State University (OSU) with a Bachelor of Science in Medical Dietetics, a background that enables Rachel to provide a more holistic approach to care for families by supporting them in their health and nutrition goals.

Rachel received her Bachelor of Science in Nursing from Mount Carmel College of Nursing and became a volunteer nurse at Holy Family Birth Center on the Texas-Mexico border. During her time there, she served a predominantly low-income, immigrant providing prenatal care and out of hospital birth. In addition to her duties as a nurse, she provided nutrition education to women, many of whom struggled with Gestational Diabetes, and she also educated women on the effective use of Natural Family Planning to avoid or achieve pregnancy.

After completing her volunteer work, Rachel took a position in the Neonatal ICU (NICU) at the OSU Wexner Medical Center, where she worked for four years. She specialized as a transport nurse, assisting with stabilizing and transferring infants from the delivery room to the NICU. She received additional expertise on breastfeeding infants compromised by prematurity and prolonged NICU stays, and she remains passionate about supporting women in their desire to breastfeed their infants. During this time, Rachel began midwifery school at The Ohio State University, achieving her long-time goal of becoming a nurse-midwife in 2019.

Rachel met her future husband while an undergraduate at OSU, and they married in 2016.  In 2017, they welcomed their daughter, Evelyn, and in 2018, their son, James. In her free time, Rachel loves to kayak, do Bikram hot yoga, and cook delicious vegan meals.

Rachel is thrilled to be joining FMCC and looks forward to getting to know the patients and making Fort Wayne her new home.